Set a task as recurring

If tasks repeat at regular intervals, you can set them as recurring.

Written by Melanie Mischlisch
Updated over a week ago

Recurring tasks are super handy for automation and provide high reliability of workflows in your everyday routines.

To mark a task as recurring, click the action button of the task and select the Repeat task option.

In task lists and details, recurring tasks are marked with the clock icon with an arrow.

Recurring tasks are copies of the original task

A task set as recurring is copied from the original task and given a new deadline when the set rule is triggered. This means that each copied instance can be edited, deleted and moved independently of the recurring task.

Via the settings of the recurrence rule you can edit the original task at any time, e.g. if you want to adjust the name of the tasks created in the future.

The following values are copied from the original task:

Everything else, such as comments, recorded times, etc. will not be transferred.

Setting the recurrence rule is actually quite simple. You set the following settings one after the other:

The interval represents the rule when the task should always be copied. As basic interval steps, choose between days, weeks, months, and years. 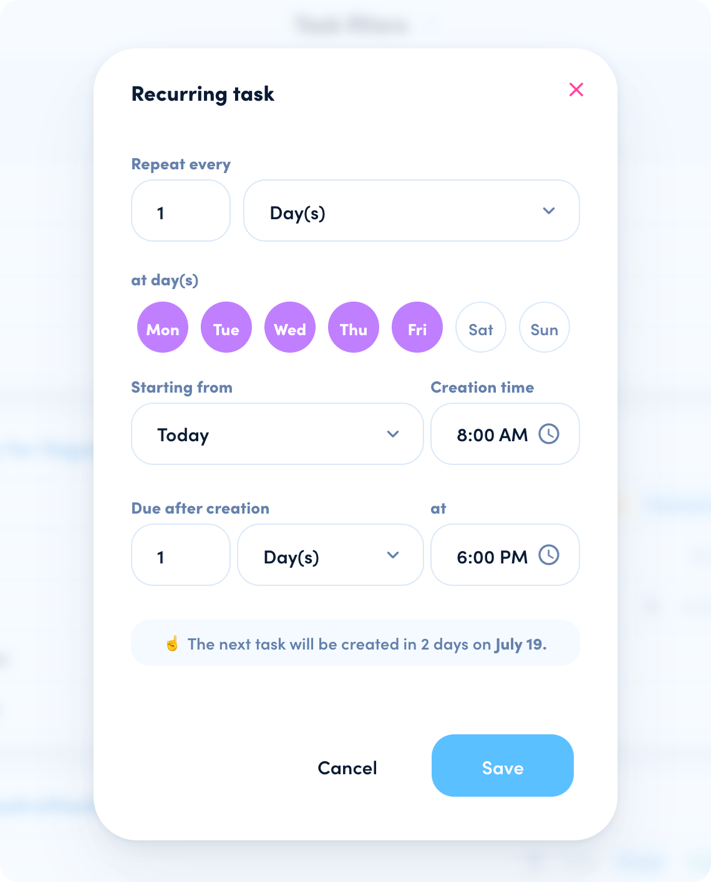 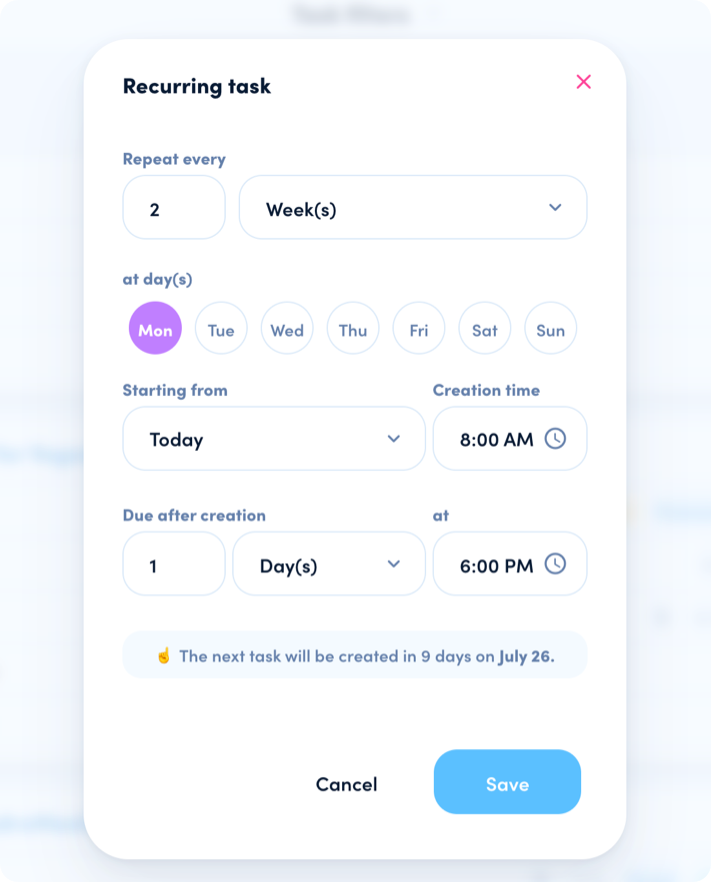 For the weeks, you can choose if a task should be repeated every week, every other week, every third week, etc. In the second step, you can determine on which day of the week the repetition will happen.

For the months, you can choose whether a task should be repeated every month or only every second, third, ... month. In the second step, you have two different options:

Option 1: A fixed day a month 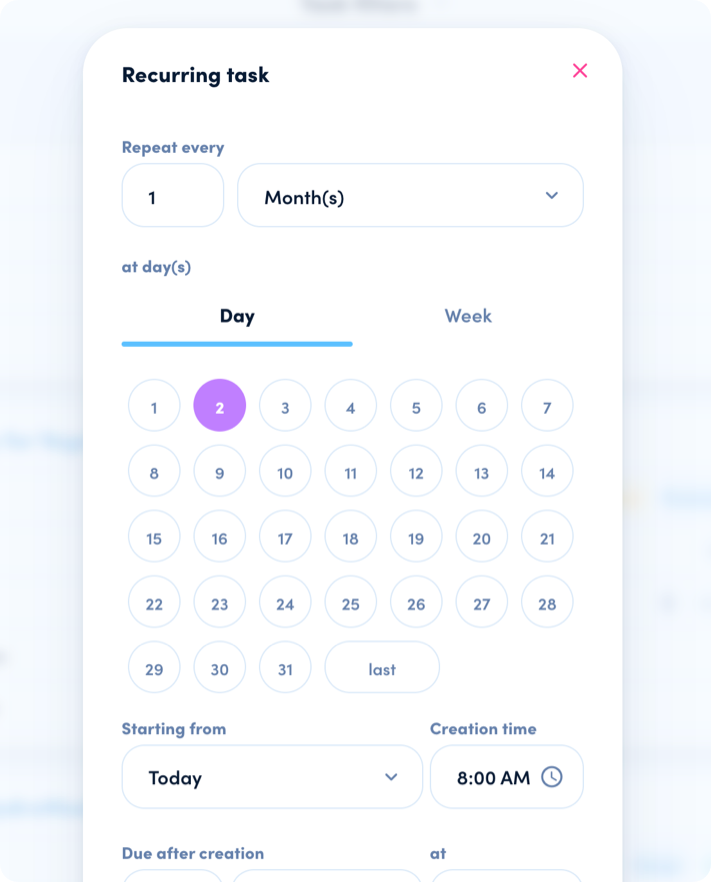 Select a fixed calendar day (1-31) on which the replay will take effect.

Option 2: The relative week plus day of the week 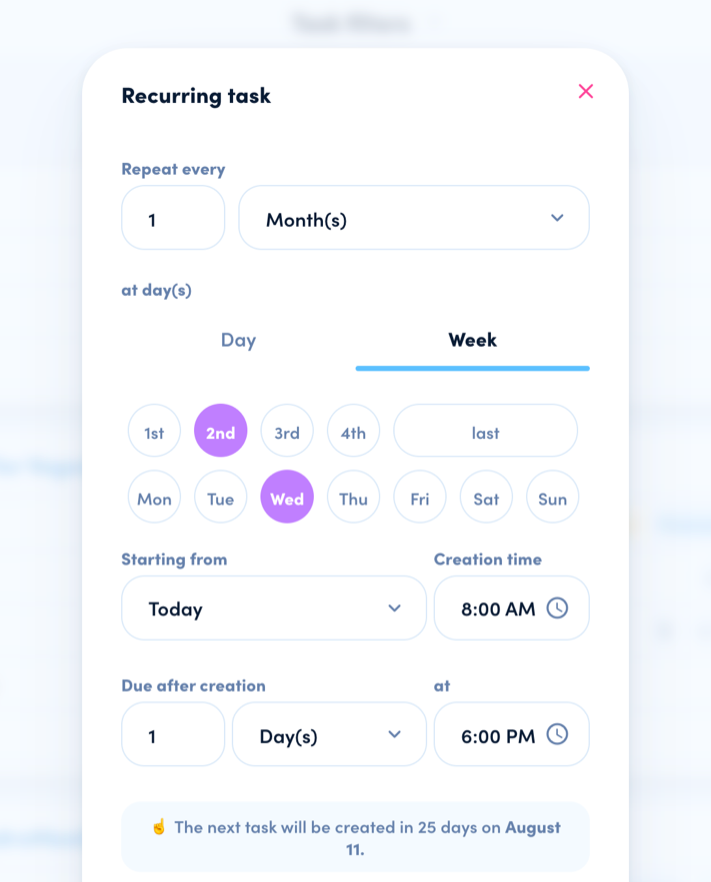 Select the week of the month (1-5, first, last) in which the recurrence should take effect and the day in the week. 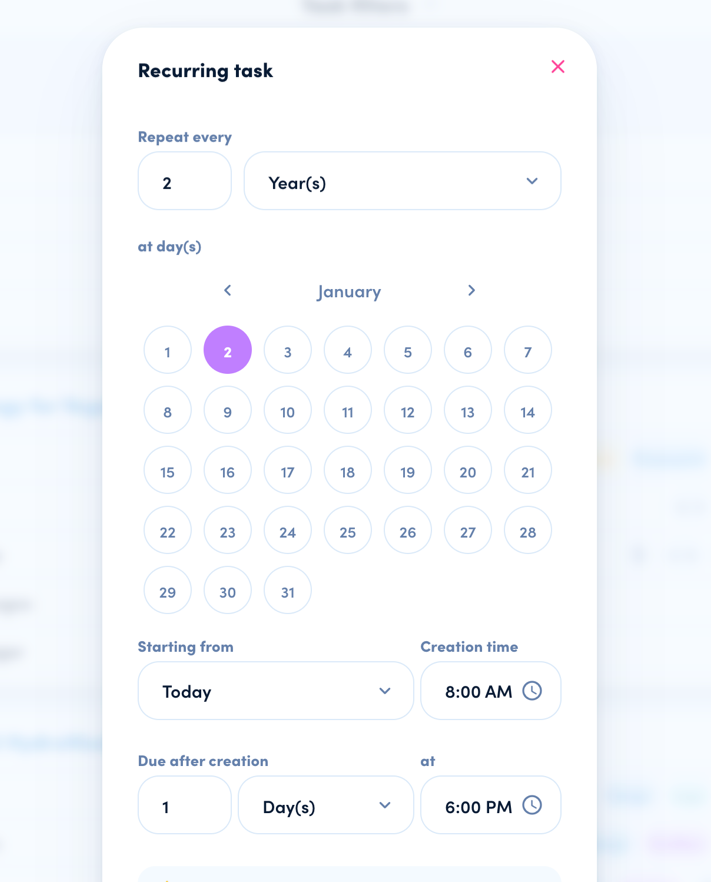 For the years, you can choose if a task should be repeated every year or only every second, third, ... year. Then you choose exactly on which date in the year the repetition should take effect.

Example: You create a recurring task that should appear every four weeks. With the setting today, the task will be created again (taking into account the details of the set interval) in four weeks.

However, you can also choose the date freely or select the task deadline as the start time. In this case, the counting of the four weeks would start with the deadline of the current task. For this, the deadline must be set in the task.

For orientation, you will find the exact date on which the next task will be created.

The time of the Starting from field represents the time when the task is created. By default, this is set to 8 a.m. (the user's local time). If you set it to 6 a.m., for example, the task will be created 2 hours earlier.

The deadline of the task is specified relative to the creation, e.g. seven days after creation.

If your task is created every four weeks, you can give it a relative deadline of seven days, for example. Then the task appears every four weeks but is not due immediately, and the assigned user has seven days to complete it.

To prevent a task from continuing as a recurring task, click the clock icon with the arrow in the task details and remove the rule there. This applies for both the recurring and the main tasks.

And, of course, as soon as the project receives the status "done", the recurrence is terminated.